This sort of performance complaint generally indicates an issue with the user’s internet connection or local workstation or resource starvation on the Citrix Desktop Host (low memory/CPU).Rarely does this indicate a congestion and/or latency issue with the CloudConnect infrastructure.This Article will assist in identifying the cause.

Most performance issues are caused by virtual machine snapshots, inadequate CPU/Memory allocation to the virtual machine, the incorrect Citrix Receiver/Workspace version, or network congestion/packet loss with the customer's ISP.

First, it is  best to check if there is a snapshot on the virtual machine in vCloud Director.  A snapshot slows down disk I/O in a virtual environment.  If there is a snapshot, remove the snapshot.  For additional information on snapshots, see: CloudConnect Docs: Managing Virtual Machine Snapshots

As of the publishing of this article, the recommended Citrix software for customers accessing virtual desktops from Windows PCs is Citrix Receiver 4.9 LTSR CU9

If Windows Operating System file corruption is suspected, the following commands may be run from an elevated command prompt:

Third party Antimalware agents can cause severe performance problems on a Citrix Server.  It is recommended to not use third party antimalware agents, rather CloudConnect recommends the Default Windows Defender Security configuration in combination with Windows AppLocker.

Verify that Windows Defender is not running a System Scan during business hours or peak usage time.  Windows Defender Scans, though performance tuned, can still slow down loading of applications, documents and typing/keystroke speed.

The following steps can provide a basic level of triage of some of the above issues.

It is best to begin by ruling out issues with the user’s Internet Service Provider. From the user’s workstation open a command prompt and enter the following:

If dropped packets occur and/or latency is frequently and/or consistently greater than 70ms, contact your ISP to troubleshoot.This may include resetting your modem.It could also indicate a problem with the on-site network, LAN or WLAN if applicable.

If the output above yields a reply “time” value consistently less than 70ms and there are no replies dropped (i.e. “request timed out”), then the ISP is not likely the cause, and proceed to the next step. 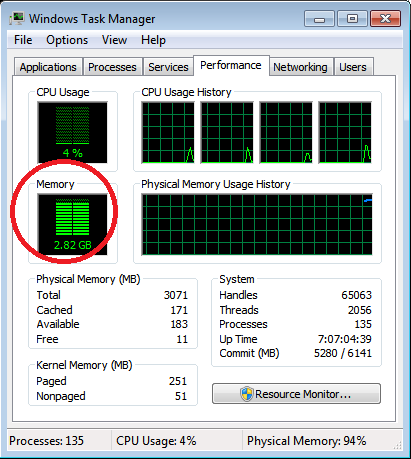 It is also possible for excessive CPU utilization to cause a problem.Use the processes tab to identify the culprit process and disable/remove unnecessary programs.It should be noted that the Citrix Receiver utilizes minimal processor and memory resources.

If all of the above troubleshooting steps do not identify a cause, open a Ticket with CloudConnect Technical Support. Ask the Technical Support Engineer to investigate possible virtual machine snapshot growth pursuant to KB Article CCT-201410083.

For Citrix environments where a Citrix bug is suspected (for example after upgrading the Citrix software to a new version), a CDF trace may be required to identify the root cause.  This root cause analysis process can take several weeks and should be used as a last resort when all other options have been exhausted and no workaround is available.  Contact CloudConnect Technical Support for additional information.

Did you find it helpful? Yes No

Send feedback
Sorry we couldn't be helpful. Help us improve this article with your feedback.